While GM was developing the racing Corvette in 1996 they recognized the need for superior protection and thus the superior performance of synthetic oils.

GM began using synthetic engine oil as a factory fill to protect the high performance high output Corvette engines and they put their faith into Mobil 1.

Last I checked GM does not make oil but they do specify requirements the engine oil must meet.

Below are the test results showing how Mobil 1 compares to the other leading oils.  Here I will be speaking to the comparison of Mobile 1 vs Amsoil.

Before you get too skeptical you should know Amsoil contracted to have a third party testing lab perform comparison testing of the leading oils to prove which oils live up to their claims and which ones are hype.

So when comparing Mobil 1 vs Amsoil you can know that these results were performed by an independent entity and stand up to retesting and legal scrutiny (and the results are interesting).

The 2015 Corvette Z06 has at least 625 horsepower with 635 ft/lbs of torque of the the 6.2L V8 engine.  This type of performance demands excellent lubrication.  The four ball wear test below shows how oil performs under very heavy loading.  Notice Mobil 1 at the right side of the chart and AMSOIL Signature Series at the left side of the chart. 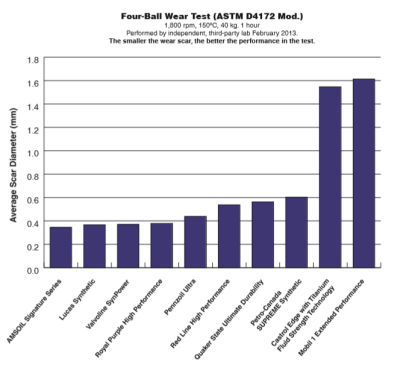 The smaller the wear scar the better and in this case AMSOIL tested out superior to all the other oils.  Amsoil had less then 0.4mm Scar Diameter where Mobile 1 was in excess of 1.6mm.  Is this comparison of Mobil 1 vs Amsoil... Amsoil wins.

This test is conducted in a standard method in accordance with ASTM D4172.

Since most of the engine wear will take place while starting the engine its important that oil flows freely at ambient temperatures.  This is especially true for Corvettes that are not typically used as an everyday driver.  You want an oil that leaves a film on all the interior engine components during extended storage but you especially want an oil that is very fluid when you first start the engine. 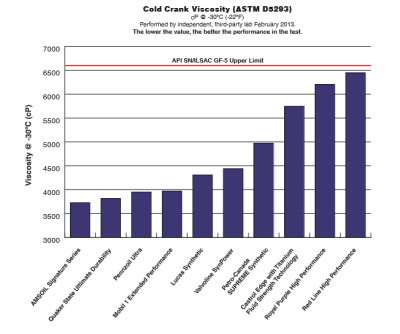 As you can see to the left of the chart is AMSOIL with the lowest cold crank viscocity which means the AMSOIL oil will flow up into the engine on a cold start much more rapidly than other oils.  That means your Corvette engine is protected sooner than with other oils on start.  Mobil 1 came in 4th place after Pennzoil Ultra.  In the Mobil 1 vs Amsoil comparison... again Amsoil comes out on top.

If you don't drive your Corvette in the rain or in the winter then one of the important features of an engine oil is its ability to protect the engine from corrosion while it sits in the garage.  The chart below is the TBN number of the oils tested.  The higher the TBN number the higher capacity the oil has to neutralize the acids produced while fuel is being burned.  The higher the number the better able the oil can provide shutdown corrosion protection. 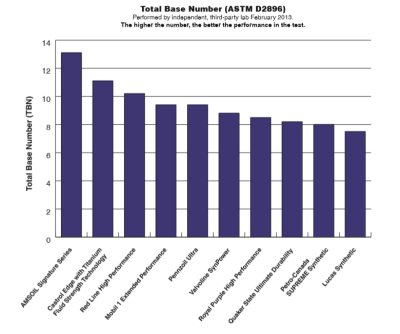 AMSOIL is again the clear winner in this test and does provide the longest life oil with the best engine protection.